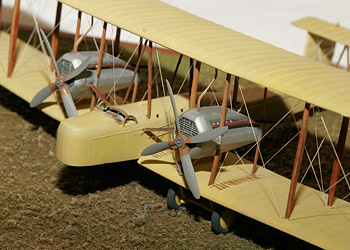 The lady who commissioned the build is the grand daughter of Mr Frank Wand who was one of 11 men chosen to assemble the Vimy in New Foundland. She purchased the Eastern Express Vimy kit at Brooklands.

There is only one place to start and that is with the old Frog, or in this case Eastern Express kit. The kit was first produced as the Transatlantic Vimy in its original boxing, in the Trail Blazers series in 1960 something.


The kit does not require much modification as it has the "humped back extra fuel shape" of the original and not the flat deck of the bomber.

The first thing to do is to throw away all the bombing clutter and fill the holes left once the gun stations are removed. As you can see from a kit of this age, nothing fits. It was at this point I made my first mistake, a lot more time should have been taken lining up the engine supports to ensure a square build, of which more later


At this stage there was some discussion on colour and a text was produced proving the Vimy was pale yellow. The build progressed with much filling and sanding until a pale yellow piece of plastic was due to have the top wing fitted.

At this point the first disaster occurred; the top wing would not meet any of the strut locations and the engine supports twisted visibly. This was the point where Aeroclub were called and a pack of plastic "STRUTZ" and a biplane jig was purchased. All the engine support struts were replaced, a drawing (of a bomber with Russian text) was procured and a rebuild ensued using the drawing dimensions, and had reached the point of being rigged when disaster two happened.

The plane was out of the jig, which is in my view essential for biplane modelling, was being rigged when it decided to jump off the modelling table. I caught it between my knees (superb reactions) and the sound was that of the original landing in Ireland. I knew I should not have told my wife "the customer can have this soon, as the rigging, which I hated, was going well". At this point 'the nationals' were happening and I saw the completed item on the Frog SIG stand which gave me hope.


All the rigging and struts were removed (again), I tried and failed to buy a new kit, so once again reverted to Strutz the drawing and the jig. All went together well, I had taken the opportunity of the second disaster to repaint in a more appropriate yellow. I think only one Eastern Express strut is on the plane all the others were broken and replaced, and I found a new system of rigging which takes the pain out of it as a result of disaster two which I will continue to develop. I decided to put the plane on a base to reduce the chance of disaster three and to aid customer handling. This was sprayed with aerosol adhesive and railway scatter products were used to finish it off.